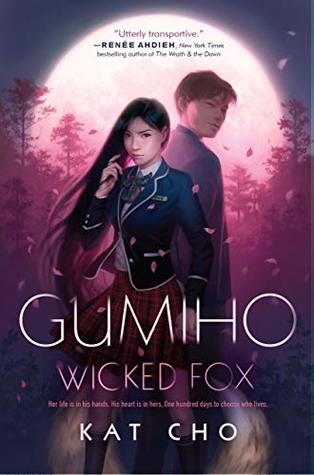 Synopsis:
Eighteen-year-old Gu Miyoung has a secret–she’s a  gumiho, a nine-tailed fox who must devour the energy of men in order to survive. Because so few believe in the old tales anymore, and with so many evil men no one will miss, the modern city of Seoul is the perfect place to hide and hunt.

But after feeding one full moon, Miyoung crosses paths with Jihoon, a   human boy, being attacked by a goblin deep in the forest. Against her better judgment, she violates the rules of survival to rescue the boy, losing her fox bead–her gumiho soul–in the process.

Jihoon knows Miyoung is more than just a beautiful girl–he saw her nine tails the night she saved his life. His grandmother used to tell him stories of the gumiho, of their power and the danger they pose to humans. He’s drawn to her anyway.

With murderous forces lurking in the background, Miyoung and Jihoon develop a tenuous friendship that blossoms into something more. But when a young shaman tries to reunite Miyoung with her bead, the consequences are disastrous . . . forcing Miyoung to choose between her immortal life and Jihoon’s.

Why did I have to read this? I was doing so freaking well, all the books I’ve been reading were 4-5 stars, but of course I have to mess it up for myself and read a stupid book that’s just so bad.
It started out so well, so strong, I honestly thought this is going to be a favorite of mine, but naaah, of course, that can’t happen, can it? It turned out to be super cliché and just annoying.

The characters are so lame. Honestly, authors, just because you give your main characters a sad life doesn’t actually mean that they have a personality. There, I said it.
Miyoung is the stupidest character ever, she’s so indecisive, at one point she wants to do this one, and then the other one. I mean, mood, but still annoying.

There is actually zero chemistry between Miyoung and Jihoon, and by zero, I mean actually zero.
I’d prefer if she were alone, honestly, Jihoon isn’t a nice character, he’s annoying as hell, there wasn’t a point in this whole book where I was interested in their relationship. It was super cringy.

Literally nothing happened in this book, I’m trying to remember what the hell actually happened but I can’t remember? It was really repetitive, the story wasn’t going anywhere, it was just suffering with us, readers.
I went into this thinking that it’s gonna be a badass Korean mythology with gumiho and epic adventures, but oh boy, was I wrong…see, that’s the problem. I mean, going into a book thinking that you’re gonna enjoy the hell out of it, it’s gonna be one of your favorites, but then it actually ends up being a bad book.
It sucks.

I was looking for reasons to give this at least two stars, but I can’t seem to find one, and I’m just done, why would I give a book two stars if I literally can’t find a time I was enjoying myself while reading this?
This book is literally a YA contemporary with slightly fantasy aspect and annoying characters. What the hell.
The only good thing about this book is the cover and it ends there.

It ways so long, and literally nothing mentionable happened, I’m totally and utterly disappointed, I would’ve dnf’d it, but I didn’t wanna get behind my Goodreads challenge so whatever, it is what it is.
Okay, goodbye!

“I guess now would be a good time to tell you,” He said. “I took Chainsaw out of my dreams.”